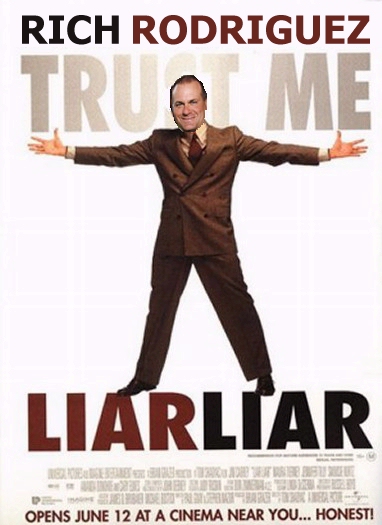 First, it looks as if he talked to Terrelle Pryor, the #1 recruit in the country, before telling anyone else of his decision. Here's how that went down:

That was how things began on Sunday morning with Terrelle Pryor informing us of perhaps the biggest coaching story of the year. As the day progressed we began to put the pieces of the puzzle together.

One of Pryor's coaches called and informed us ten minutes later that Rich Rodriguez had informed his players taht he had indeed accepted the Michigan job.
So, Rodriguez tells Pryor Sunday morning that he's leaving and later that afternoon, Rodriguez decides he should probably tell, you know, his fucking players and coaches. Classy. Of course, the reason for this was to take Pryor's interest and transfer it from WVU to Michigan. That looks to have worked...to an extent.

But upon learning of Rodriguez's move, Pryor said, "Michigan is back on my list."

When asked where West Virginia now stands, he said, "West Virginia is off."
Fair enough. I would've been shocked if Pryor had made any other move. But the next statement is telling:

Pryor said he was "surprised" by Rodriguez's decision. Rodriguez called Pryor yesterday and told him he was leaving.

Pryor said he most likely will make an official visit to Michigan. Although he is now considering the Wolverines, he also said he looks at Rodriguez a little differently.

"One of the bad things is that he's leaving a place once, so he could leave again," Pryor said.
Exactly. West Virginia's new coach should call each and every player on Michigan's recruiting list and remind them of exactly that. His credibility is pretty shot right now. Sure, if he wins, this will be all wiped away, but for now, he's vulnerable.

Shayne Hale, one of the top linebackers in the country, had even harsher words for Rodriguez:

Gateway linebacker Shayne Hale also was considering West Virginia, but said the Mountaineers are no longer on his list. He visited West Virginia the weekend of the loss to Pitt.

"I was still considering West Virginia, so this is a big shocker," Hale said. "Personally, I didn't expect him to be leaving. He was telling everyone that he was going to be there for a while and that he wasn't going anywhere. This makes him look like he lied."
Yes, a liar indeed.

Let's face it: we're not going to get guys like Pryor and Hale. If the loss to Pitt didn't finish our chances, losing Rodriguez certainly did. But, we still have the high road. There are still plenty of recruits who have yet to make up their mind. Even the recruits who have made up their mind will probably change it three times before now and signing day.

It is uber-important to make a quick, big-time hire and get the recruiting process back on track. Plus, if we could steal just one Michigan recruit, it would make my day. Or if Rodriguez gets hit by a bus. Either way.